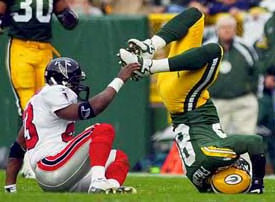 I like the Packers (Brett Favre is my favorite player). But my favorite team is the Jaguars. They are playng the Tennessee Titans and I think they will win.

Will I am not to much of a NFL football fan, but how about them Louivile Cardinals last night ? When I watch an NFL game I usually watch the Falcons . RON.

I personally think that I like Pittsburgh. They probably have a good chance of winning. Like you said, Denver will be tough.

My husband's team is the Steelers,

Bills was my team!

Uncle Gordon,
Brett Favre is my favorite too. Congratulations on Jacksonville's win.

Mr. Ron,
I really like the Falcons. Michael Vick is one of the best quarterbacks.

Clay,
We have something in common! Can't wait to see you at Thanksgiving. Maybe we can play some football then.

Thanks to everybody for visiting and commenting.

I like the Colts, because of Tony Dungy and Peyton Manning.