A Friend to the South: George Washington Carver 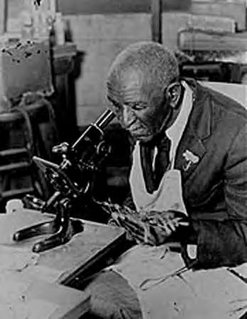 George Washington Carver helped the economy of the South after the Civil War with his great ideas. George was born in 1861 to a slave family owned by Moses Carver. He lived in Diamond Grove, Missouri. When George was an infant, his father was killed and his mother was stolen. Mr. Carver raised George as his own son.

As a child, he loved to paint and used plants for his supplies. At ten years old, George left home to go to school. Because he loved plants, his art teacher encouraged him to study them at college. He later taught at Tuskegee Institute where he found many uses for the sweet potato and peanut. This helped the South to have healthy crops that they could sell. One of George's greatest discoveries was crop rotation, a method of planting different crops each year in order to have the best soil.

George Carver died in 1943. He had been a loyal, hardworking friend to the South who overcame many hardships to become the man he was.

You can find more information about George Washington Carver and Tuskegee Institute here:

And here's a really cool site for kids with activity pages about Mr. Carver:

Carver Coloring and Activity Book
Posted by Nephos at 10:37 AM

Will, I really enjoyed your blog spot. Bimby really likes George Washington Carver because he loves peanut butter sandwiches so much.
Keep up the good writing. I am so proud of you. Love MeMe

This is cool, I didn't know he lived in MO, and never heared of Diamond Grove, and I'm from MO.

just goes to show you are never to old to learn something!

Will this is good? I am thankful for peanut butter , cause I guess when I was little that was all I had to snack on ! My Dad was a farmer and every year I had to pick 2 bushels of peanuts so my Mom could make home made peanut butter and she canned it? Thanks for bringing back memories, helps me to remember how great our GOD is ! RON.

Will, this is really good research and writing. You are turning into an A1 blogger.

Thanks for all the kind comments.

MeMe,
I really like peanut butter too. Tell Bimby hi for me.